It’s both hard and easy to imagine how the tsunami wreaked such havoc on this pristine beach. The waves crack at the sand like a whip, despite the smooth seas and light breeze that comes from the shore. The sea is immense, an undulating blue carpet, glittering with the sun; the horizon flat and far away.

I stand knee deep in the foamy waves. The first wave is gentle. It lulls me to believe I can wade in deeper. But each wave rises higher than the next, starting gently and then ending with a crash that soaks my shorts and the hem of my t-shirt. I’m being pulled in, lured to get wet and play, and warned at the same time: keep back! 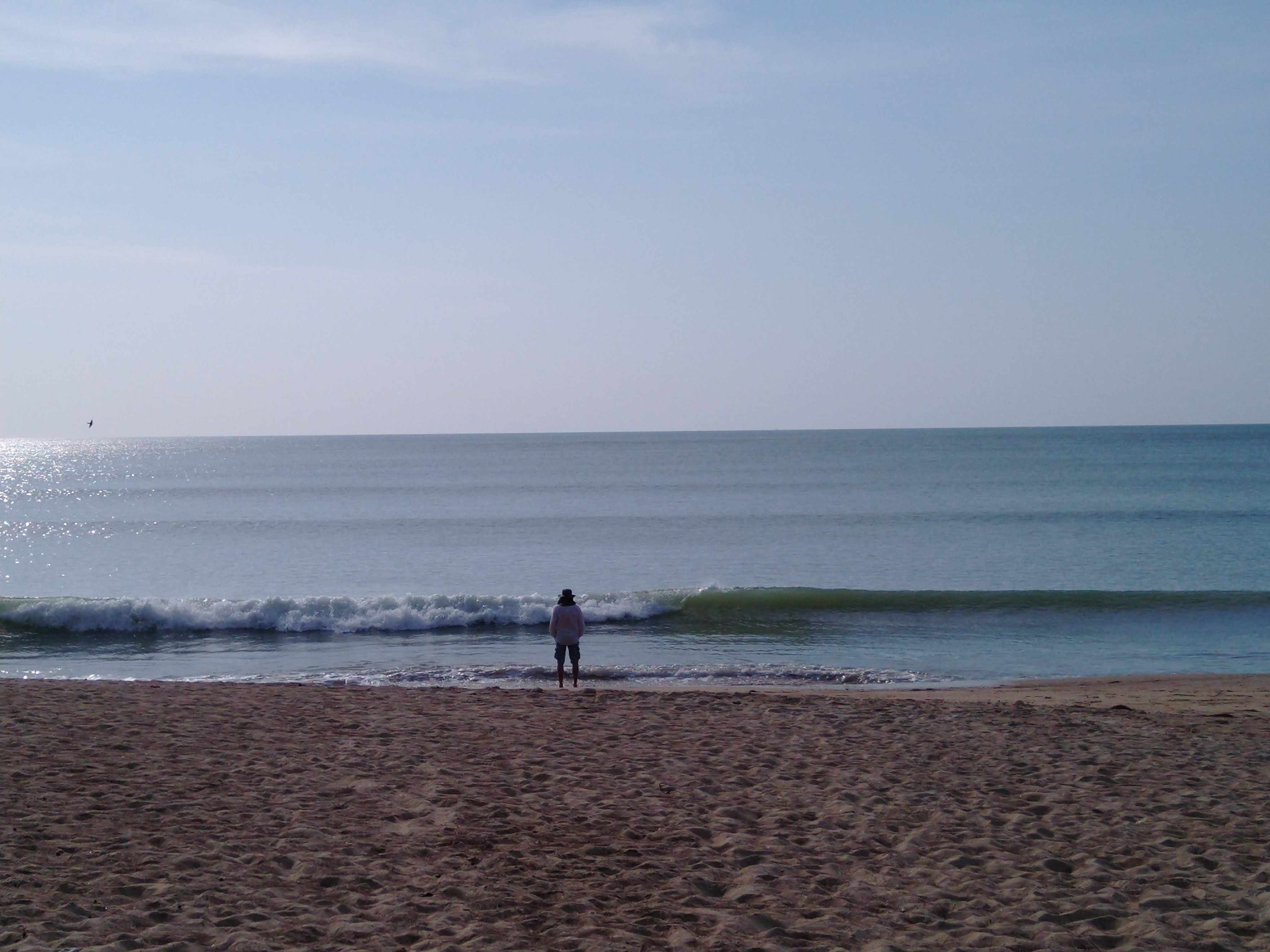 I read on Wikipedia that between 4000 and 10,000 people from this area, some of them tourists, died here in the Tsunami of Boxing Day 2004. This is the area that was hit the hardest. Nowadays they have better precautions: there’s a tsunami evacuation building that looks quite sturdy about 5 minutes bike ride from our homestay, though I wonder how many people it can actually fit and how long in advance there will be a warning. Apparently there could be as much as two hours, which means that there should be time to get to higher ground if you can hitch a ride. There are signs on the way to the beach, reminding you that this is a tsunami hazard area and there’s a tall tower which says “warning tower” nearby.

When we return to the place we are staying at, I look up pictures and a film taken during the tsunami here. It’s terrifying to see how the tourist who filmed it is so blasé at first, but slowly seems to realize that this breaking wave is quite unusual. Even so, he seems to be filming for quite a long time, while I am willing him to get out of there already. When he sees a fishing boat capsize, he and his wife begin to run. You see the red of his swimsuit and later the green of the trees and the electricity wires above him, and hear his panicked voice as he runs. I say to myself – he must have survived, because he posted this video online… After a run of about 5 minutes, you see the devastation below.

The beach at Khao Yak “Thai Life” resort is virtually empty today. The resort, though newly built and attractive, echoes like a ghost town, the pools outside each villa  glisten boldly but the seaside shaded massage beds are bereft of tourists. The staff here outnumber the visitors at least five to one.

The waitresses are happy to make us drinks. I order a butterfly pea and lime honey shake after asking what it actually is. She shows me a handful of dried purple flowers that have a delicate scent.  The drinks arrive in big Mason jars and are tasty and refreshing. Theo has an Orange Bliss smoothie which makes him very joyful. We take the time to photograph them, along with the small shells we’ve collected from the beach. We shoot the pictures with the sea and beach in the background, comparing his photos to mine, until we decide which photo we deem the best.

A writer, a dreamer, a teacher at university and at heart, a counselor, coach, friend, mother, and wife. An American/Israeli living in the Netherlands since 2001. View all posts by creativeaudrey

This site uses Akismet to reduce spam. Learn how your comment data is processed.

Well, if it’s normal to sail through the South Pacific on your parents’ yacht for 4 years – from age 10 – then I guess my life has been quite mundane. Read more about that here:  More about me!